Political Participation and the Women, Peace and Security Agenda Program

Political Participation and the Women, Peace and Security Agenda Program

This program has witnessed several developments since its launch until now. When it was launched, it was called the “Women Empowerment Program.” At that time, it provided various interventions for women in various fields, including political participation, economic empowerment, legal services, and others, and aimed to contribute to the empowerment of women (specially working women) and enhancement of their participation and involvement in all aspects of life based on gender equality and women’s human rights.  In 2011, another development took place on the program, as it became results oriented rather than activities oriented. It also became a strategic program for the association, providing services to women regardless of project funding. In the year 2020/2021, and prior to preparing the association’s strategic plan 2021-2025, the name of the program was changed to become currently: “The Political Participation and the Women, Peace and Security Agenda Program under the strategic objective “Palestinian women in the occupied territories are more empowered and participate in decision-making in the public and private spheres , and contribute to the implementation of the women m peace and security agenda. As part of PWWSD new strategic plan, the economic interventions were separated from the program, so that economic empowerment became an additional program, while maintaining the focus on the area of ​​women's political participation and the agenda of women, peace and security.

This Program is one of the most important tools utilized by PWWSD to achieve its goals. It represents the spinal cord of the organization’s work where it educates women about their rights and develops their capacity to be involved in decision-making positions. Within the Program, women are introduced to their rights within the Palestinian laws and international humanitarian law, as well as motivating them to become agents of change and advocate their rights. The Program trains women to become leaders and advocators of their rights. In addition to that, the Program (jointly with the other components of the organization) conducts lobbying and advocacy campaigns in order to amend the operating laws and procedures in a manner that takes into consideration women’s rights and gender equality. The lobbying and advocacy campaigns seek addressing duty bearers to fulfill their legal and moral responsibilities towards women’s rights and gender equality. Women capacity to conduct lobbying and advocacy campaigns is developed within the Program where they interpret the knowledge and skills through being involved in the lobbying and advocacy campaigns that the organization arranges. Women targeted by the Program are trained on documenting of human rights violations in order to contribute in enhancing the culture of human rights within the Palestinian community. Additionally, the Program, on a related level, utilizes media as a tool to educate women about their rights, as well as affecting the public opinion to stress respect of women’s rights. Open panels, seminars, study circles, and hearing sessions are among the major activities arranged by the program to create public opinion supportive of women’s rights and gender equality principles. Moreover, the Program publishes researches and studies that tackle women’s issues in order to increase the community’s sensitivity of these issues as well as functioning as reference for interested people in this field. Also, the Program works on providing women with access to justice through providing them with legal consultation and representing them in courts through licensed lawyers. Within the Political Participation and the Women, Peace and Security Agenda Program, and through its various components, PWWSD works to develop a progressive developmental discourse that takes into consideration gender-equality and women’s rights on the base of being human rights. It dedicates all its efforts and resources in order to mainstream women's rights and the concept of gender equality within the community, as well as mainstreaming women's rights as human rights.

As part of PWWSD believes in networking and joint work, the political participation program coordinates with all organizations that share the same values. The lobbying and advocacy activities are conducted usually in cooperation and coordination with counterpart organizations believing in the importance of joint activities in achieving better results. Additionally, the program targets CBOs in the field in order to conduct joint activities with them where these activities serve the interests of the target groups on the one hand and develops the roles of the CBOs on the other. On a related level, various activities are conducted jointly with the organizations members of the Gender Forum in Local Governance, as PWWSD is hosting the forum since 2019 up to now. The program also conducts joint activities within the national coalition of UNSCR 1325 in order to highlight the role of this resolution in protecting women. In addition, to being an active member in several local networks at the local and the national levels, PWWSD is member in various networks at the regional and international levels and is engaged in various discussions and processes in order to reflect the Palestinian women’s aspiration.

In ongoing awareness-raising, the Political Participation Program works to raise Women’s awareness of their political, civic, and legal rights and develop their capacity to defend these rights. Educational activities including adult educational lectures and workshops for woman and girls, study circles, and experience exchanges between women’s groups locally, regionally, and globally. The program conducts training courses to develop women’s knowledge, to change the gender stereotypes, and to build woman’s leadership capacities. Decision-makers and policy-designers are targeted through organizing open panels and workshops to highlight issues related to women’s rights in general, such women’s rights in the applied laws, participation in decision-making processes, elections, and gender equality within the various aspects of the community’s life.

Through the Political Participation Program, women are organized in community-based organizations (CBOs).  It also gives special attention to female members of local authorities and other decision- making circles in order to provide them with the needed support. PWWSD has established shadow councils as a support structure for elected women within local councils, as well as monitoring the performance of the local authorities to underline their commitment to the principles of gender equality and respect of women’s rights.

On the level of lobbying and advocacy, the program is active , as part of PWWSD ,within several local, regional, and global networks and coalitions to achieve the objectives of the lobbying and advocacy campaigns. On a related level, the program arranges lobbying and advocacy campaigns to eliminate descrimination against women and provide women with protection within the Palestinian basic laws and all other laws, particularly the Penalty and Personal Status laws.  The program arranges individual and collective meetings with decision- makers and participates in developing the national plan to enhance women’s rights and gender equality in partnership with various concerned governmental and non- governmental organizations.

In general, the political participation program works to empower women individually and collectively, through three levels: the first; By targeting women themselves to raise their awareness and raise their capabilities to defend their rights and involve them in bringing about societal change, and the second; By targeting decision makers to pressure them to fulfill their commitment to women's issues, and third; At the community level, with the aim of contributing to changing the stereotypical view of women's roles. On another level, the work of the political participation program intersects with the other programs of PWWSD, where women benefit from the social and economic services provided by the association in an integrated manner for women.

Organizing Women in Grassroots bodies: Through the Program, women are organized in grassroots bodies in order to contribute in enhancing women’s political performance. PWWSD formed 99 Shadow Councils ( 95 councils in the WB +4 councils in Gaza ) membered by women leaders from the various targeted localities. The role of the Shadow Councils in to enhance women members of local governance bodies performance and advocate the local authorities. Additionally, during 2019- 2021, PWWSD hosted and coordinated the Gender Forum in the Local Governance that is involved in enhancing gender equality within the local governance bodies.

According to the Central Election Committee (CEC), the Local elections 2021/2022 for the first and second phases were carried out in 389 locations, of which 204 locations won through election, and 185 won by acclamation. In addition to the 29 locations in which no elections were held in both phases, as long as none of them submitted any electoral list.

The total percentage of women candidates for both phases was around 26% (25.4% for the first phase / 26.7% for the second phase)

The total percentage of women winning seats by Acclamation and Voting in both the first and second round was 20.4% (21.8 % for the first phase, and 19% for the second phase) .

As for PWWSD: 97 women ran for the first and the second phases, distributed as follows: 59 ran as shadow council members, and 38 ran as PWWSD activists. Out of the 97 candidates, a total of 61 women won the elections (44 from the shadow councils, and 17 from PWWSD activists). 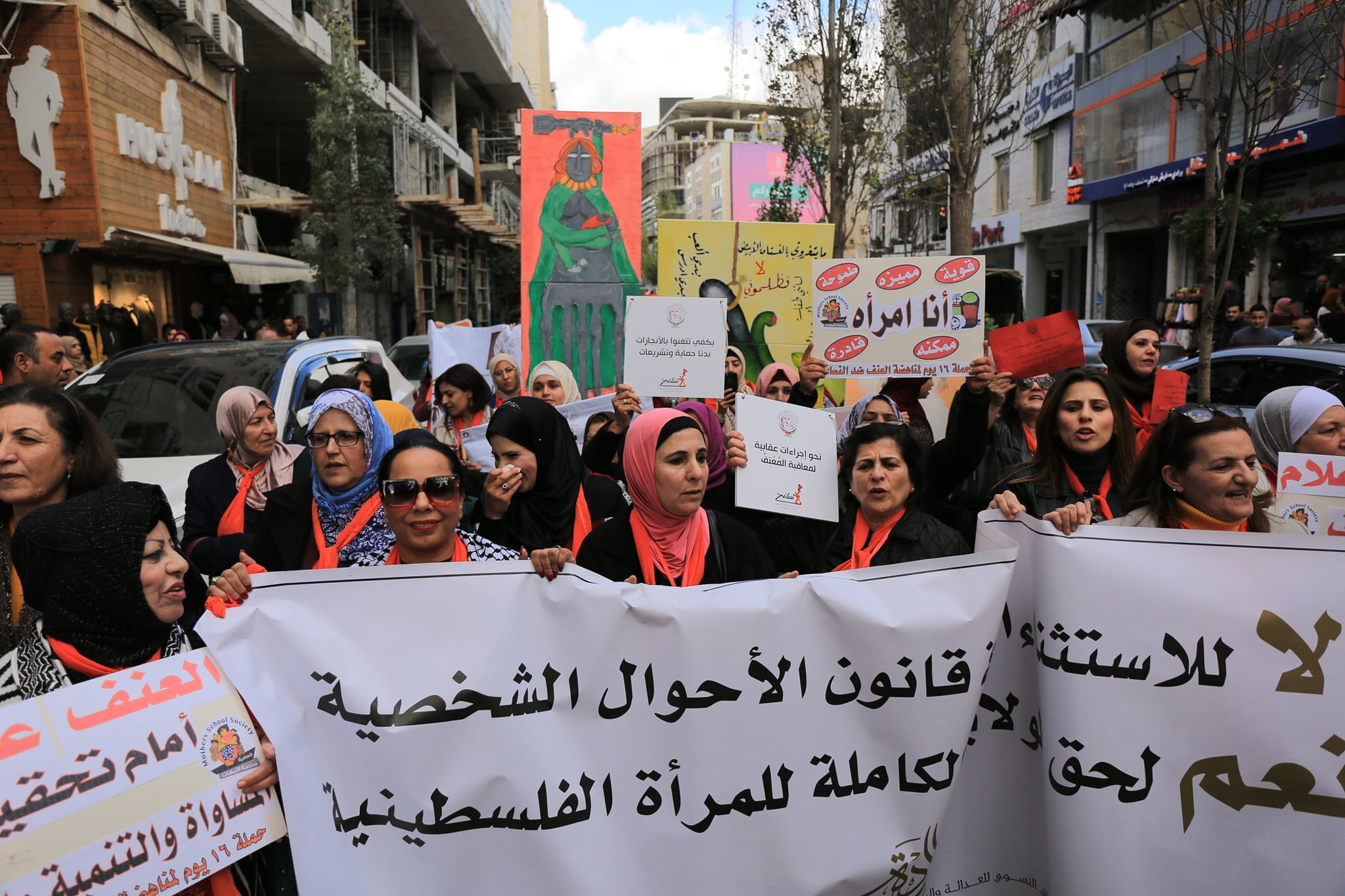