As part of its efforts to raise awareness on women’s rights and lobby decision makers to end all forms of discriminations against women and girls, The Palestinian Working Woman Society for Development (PWWSD) holds several lobbying and advocacy activities on the local level, including; campaigns, policy dialogues, and demonstrations among others. PWWSD believes that the struggles for economic, political, and social equality cannot be separated and therefore works closely through its programs to promote gender equality within these arenas. PWWSD also contributes to the efforts of national networks to hold duty bearers accountable in regards to discriminatory laws and legislations that further emphasize patriarchal norms and attitudes.

Demonstration to pass the Family Protection Bill during the 16 Days Campaign. December, 2019

In 2019, PWWSD participated and led many activities to pressure the government and other decision-making bodies to pass the Family Protection Bill framed by civil society organisations and the General Union of Palestinian Women. PWWSD led its national campaign to combat gender-based violence around the theme of protection and accountability for women and focusing on the Family Protection Bill. The Society also worked jointly with the Palestinian Non- Governmental Organization against Domestic Violence against Women (Al-Muntada) during the 16 Days campaign and had participated in demonstrations and advocacy events organized by Al-Muntada to protest the unfair jurisdiction of perpetuators of violence and to ensure justice for victims of violence including women and girls with disabilities. PWWSD also participated in several meetings of the Civil Coalition of the Personal Status Law organized which discussed the developments on the Family Protection Bill and proposed strategies to tackle the Personal Status Law. The coalition developed a memorandum demanding the raise the minimum age of marriage (18 years old without any exception) and submitted it to the Legislations Compliance Committee. The government had recently adopted a legislation to raise the age of marriage which become effective as of January 2020. 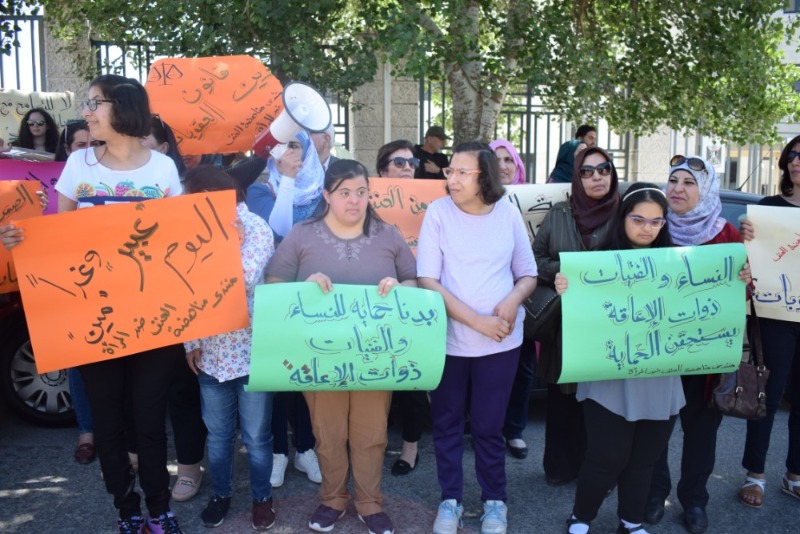 Protest in support of women with disabilities after a case of assault. May, 2019

The Palestinian Working Woman Society for Development supported the report of the Independent International Commission of Inquiry that was conducted between December 2018 and March 2019. PWWSD extended support for the Commission, which was not allowed to enter Gaza due to the on-going Israeli blockade, through facilitating first-hand interviews with women and children who were directly affected by the on-going demonstrations in Gaza of the Marches of Return since March 2018.

Additionally, PWWSD participated in meetings and follow up with the Women Coalition to implement UNSCR 1325 led by General Union for Palestinian Women. The meetings aimed for developing the strategic log frame on prevention, protection and participation of women in reconciliation and peace building; restructuring the general assembly and preparing for elections of new steering committee. PWWSD also took part in different meetings and advocacy events with the Task Force on countering the hate speech against women’s rights, and actively contributed to the women movement’s efforts to cancel the attempts of some duty bearers to formulate reservations to CEDAW.