Hear My Voice: One Woman’s Story of Survival 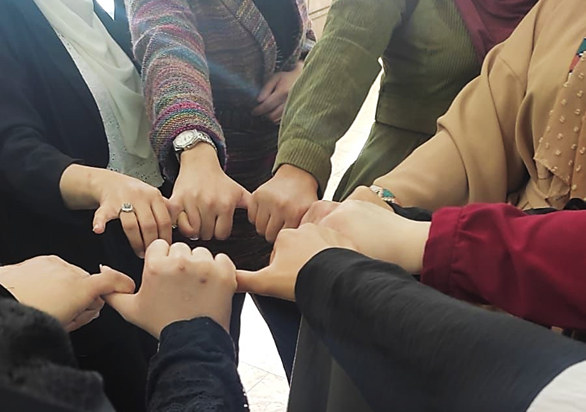 “I got rid of a large part of the feelings of injustice and fear that I was living in,” Samia says.

Thirty-nine-year-old Samia is a survivor of violence who found help through violence against women awareness and survivor sessions run by the PWWSD and UN Women through the HAYA Joint Programme. It was through these sessions that Samia not only got the courage to leave her abusive situation but found the inspiration and resilience to begin again.

Samia’s experience begins following her marriage when she moved in with her husband’s family. “It is difficult to describe their family and their life, which is different from my family and my life before, and this was the change,” explains Samia. Not long after, Samia began being subjected to psychological and physical violence by her husband’s brothers.

Samia says that at first it was very difficult to defend herself. “Everyone wanted to control me because I was giving my opinion. I started living in confrontation with them, insisting that I do exist and do have an opinion,” she says. Samia says that while her husband tried to stop the violence, he was unable to always protect her and stop them from interfering in her life.

The situation became worse when Samia’s brothers-in-law took   control of everything in her life, from her participation in society and activities to undertaking her tasks and duties and leaving the house. Samia and her husband were also struggling financially, now with children to support, and the situation at home became more stressful as Samia continued to use her voice.

“There was jealousy from the family because I was able to prove myself with them, and this is something that I felt the society, or some people, do not like- to see a strong woman.” However, Samia was still suffering under the constant violence and verbal abuse. “I felt wronged and was crying all the time. I was constantly sad, tense, and afraid,” she says, “It was killing me from the inside.” Samia and her husband decided the only escape was to move out.

During this time, Samia began participating in various awareness sessions for survivors of violence by PWWSD and UN Women through the HAYA Joint Programme on violence against women and available services to help. She also joined in individual and group sessions with the support of specialized counselors. Here, she and other survivors of violence shared their stories and inspired and supported one another. Through these sessions, Samia became more confident and learned never to give in to others or societal pressures and never to remain silent. Samia says this strength also helped her protect her children when the family began trying to control them as well. “I disconnected from the family for almost a year. There was no contact with them, especially after they attacked and insulted me.”

Unfortunately, Samia’s story is not the only one. In the West Bank and Gaza Strip, almost 30 per cent of currently or formerly married women are victims of physical violence by their husbands and 14 per cent of single women by a household member. The most recent violence survey shows that psychological violence is also high, experienced by over 50 per cent of ever married women and 40 per cent of single women. Over half of these women do not seek out help, many due to lack of knowledge about where they can find help and many due to fear of the repercussions.

“Empowering women is essential to the health and well-being of not only women, but also families and communities,” says HAYA Joint Programme Manager Hazam Tahbub. “By empowering women, we encourage them to feel strong by telling them they can do everything they wish to do.”

Through the HAYA Joint Programme, PWWSD and UN Women advocate for the prevention and response to violence against women. Together, they provide awareness, individual, and group sessions as well as well as countless bilateral policy dialogues. These are conducted with decision makers and local community based and civil society organizations to discuss the existence, access, use, and quality of services available to help survivors like Samia. They are also raising public awareness on violence against women, including the different forms of violence, how to report violence, and where to seek help through media campaigns.

“Our work towards a Palestinian society free of violence against women is a top priority for us,” says Maryse Guymond, UN Women Palestine Special Representative. “We translate this commitment into actions through investing our expertise to ensure the availability and accessibility of different essential services, such as social and health services, where women survivors of violence can speak out and seek help in a safe environment".

Samia joined a self-help group to empower women and allow opportunities to discuss the challenges around services available to help survivors and how to fix them. She now shares her own story with other survivors, hoping to inspire and help others like her, and is a positive role model for women in her village. “I started a new journey now,” she says.

*Samia is an alias used to maintain privacy and confidentiality.

There is an attachment
attach_fileAttachment
X